The first mega open air for me and the first time Cradle of Filth on an open air stage. 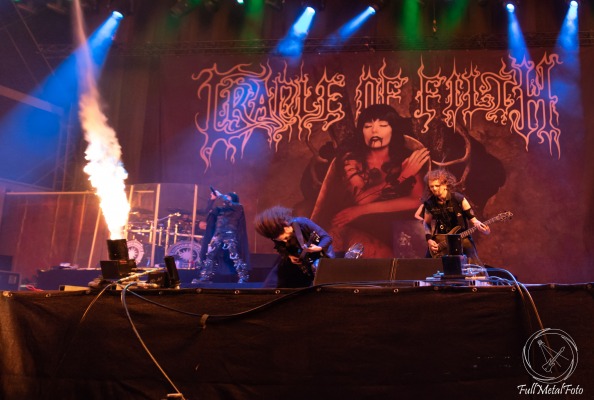 An open air with 120 bands and photos and report on only one of them? Yes!
Simple explanation, first of all we were only one day at Summer Breeze and the accreditation was directly via Cradle of Filth 🤘 Accordingly the photo pass is only valid for this band. Until I held the photo pass in my hands was a longer story, which comes further down.

Of course we also looked at other bands. Unfortunately not as many as we wanted. Two of the bands we missed were Death Angel who we saw recently in Mannheim. And Testament we saw at Super Rock 1992. So to the day exactly 27 years ago! Back then without knowing us. This year already 27 years together 😍

Because of some trials and tribulations we couldn’t see a gig completely and a review with only a few short words about a few bands.
I found it fascinating that Meshuggah could make the lightshow even more bombastic. There are pictures from the Schlachthof Wiesbaden one week before.
Interesting is Avantasia in any case. In any case a show worth seeing and hearing. But too soft for me.

I thought In Flames was better; much harder and therefore suited my taste 🤘
Also interesting were Anaal Nathrakh. So something really violent at the end of the day. Unfortunately we could only enjoy a few songs from them before we went home.
The Summer Breeze is well organized and a great festival. If it fits we will plan the three days for next year.

The primary reason for our visit was Cradle of Filth. Simply the best way to celebrate an anniversary! The possibility to photograph Cradle of Filth on a festival stage with fire is madness.
The actual concert report comes at the end. Now there is an insight into the trials and tribulations of a concert day.

After two and a half hours drive finally at the registration. For artists, photo, VIP and guests extra on the other side of the site. Very good. Guest list is clear; Photopass? Nope, the band has it. So to the backstage entrance and contact.
Unfortunately the networks are overloaded. Sometime about a colleague WLAN and a meeting point in 15 minutes. But somehow missed; meeting point not clear or message not arrived? And nobody can tell me ‚Has Cradle of Filth arrived yet? Is the photo pass approved?‘ After three hours, the security man has finished work and feels sorry for me and takes me to the office (band registration, etc). And after another 10 minutes it says „There was something. But it was too late for the usual lists.“ And lo and behold, I hold a photo pass for Cradle of Filth in my hand.

no images were found

Now watch a bit of music. And chat with colleagues. And there is WLAN in the press tent. So send messages again; we still have something for Dani and Ashok. Meet as soon as possible because the schedule is tight. Running back to the car (1,5 km) and drive to the backstage entrance. The meeting point is not well chosen. But with my photopass I can go in!? Strange. In the Artist Village I find Richard and Ashok. And I can hand over the birthday cake for Dani and Ashok.

Afterwards drive back again and run again into the visitor area. Now it’s time for Meshuggah and Battle Beast. Have a look here, eat something there and in between.

Just in time before the end of Meshuggah we walk to the main stage. In the pit is a VIP area, I actually get in there and get the cameras ready.
At the last song of Meshuggah Nicolai runs past me to the stage entrance for the crowdshot. Don’t confuse it with the C..shot 😱
Then a short palaver and then it’s clear I don’t have a photopass but a band accreditation. So unlimited in the pit, stage access and everything else 😁
Go on stage and ask about crowd shot. And who do I ask? Sure: Dani Filth 🖤🤘

Then three songs on the photo gallery behind the television cameras. With 20 other photographers. There you get closer.
It’s a ‚Cruelty and the Beast‘ show so the setlist is obvious. Full album inclusive Bathory Aria 🤘🤘🤘 From the beginning there are fire bursts. And good light and an awesome sound. After the obligatory three we are only three in the pit. Now it’s better. In between on stage to finally get good photos of Marthus. From the front through the window there is no getting through.
The show today is even better than the previous ones. Everyone is in a really good mood, I’ve never seen Dani laugh so often before. One of the best concerts I have seen or photographed.

During the last song back on stage and some more photos with band, audience and fire. Finally I get to go on stage with the tour manager for the crowd shot 😱😁
I’ve already taken some crowd shots, but the first time with Cradle of Filth and then at Summer Breeze with 35,000 visitors. COOOOL🤘🖤😁

The day was exhausting and stressful but it was worth it. I hope the somewhat different report has pleased.
Cüs,
Stephan